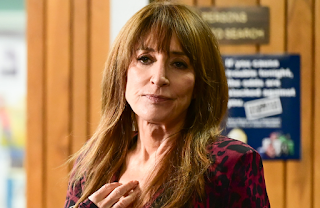 Debuting this evening, the new ABC dramatization Rebel fixates on a legitimate promoter (however not legal advisor) named Annie "Agitator" Bello, who takes a valiant, no holding back way to deal with looking for equity for her customers. Made by Gray's Anatomy's Krista Vernoff, the arrangement depends on the life and profession of the celebrated Erin Brockovich, Brockovich herself filling in as a leader maker on the show. What's more, in the show's lead job as Annie "Radical" Bello? As a matter of fact veteran TV star Katey Sagal, in the sort of solo spotlight that she's merited for seemingly forever.

Sagal started her profession not as an entertainer but rather as a reinforcement artist, working with any semblance of Bob Dylan and Gene Simmons. She was likewise broadly one of Bette Midler's renowned reinforcement artists, the Harlettes. Sagal has discovered her approach to sing in a significant number of her ventures, and any individual who's seen her sing understands what an incredible instrument she has.

Her large TV break accompanied the sitcom Married… with Children. The FOX network was in its early stages in the last part of the '80s when itdebuted the intentionally tense and unrefined family satire including a thrashed, cranky killjoy named Al Bundy (Ed O'Neill) as the show's lead, and Sagal playing his significant other, the red-bouffant-wigged Peg. Hitched… with Children wasn't the best of fine parody, yet the show was actually what FOX required: an option in contrast to the organization sitcom. Sagal was generally there to revile Al and whine that he never needed to have intercourse, yet inside those fairly thin comedic boundaries, Sagal cut out a character who, through life span and character, turned into a symbol in her own particular manner.

After Married finished its eleven-season run, Sagal's next large job would keep her in the FOX family as Sagal gave the voice of Leela, the one-looked at outsider pilot on Matt Groening's energized arrangement Futurama. Leela was second-charged among the cast (you're the best, Fry), however her essence was fundamental, and it gave Sagal another long-running show on which to show her stuff. While Futurama was all the while going, Sagal was given a role as the spouse and mother on another TV sitcom, ABC's 8 Simple Rules for Dating My Teenage Daughter. The show was a sufficient hit to make it to its subsequent season, however the surprising and unfortunate passing of arrangement star John Ritter confused everybody. The show was re-tooled around Sagal's currently bereft character, adding James Garner and David Spade to the cast as her dad and nephew, individually. This was Sagal's first time driving a TV arrangement without help from anyone else, alhough Ritter's shadow remained with the show, and it just kept going another season and a half without him.

Maybe Sagal's most acclaimed execution came not in a parody but rather in a rotate to show. The 2008 FX arrangement Sons of Anarchy revolved around a Northern California cruiser group, and specifically the Hamlet-esque difficulty between the club's leader, Clay (Ron Perlman), and its young upstart, and Clay's stepson, Jax (Charlie Hunnam). In the middle of these two men, who were the leads of the show, was Katey Sagal, playing Gemma, Clay's "wife," to utilize the speech of the show, and Jax's mom. Gemma was an extreme lady who could be incredibly heartless when it came to ensuring her child and her man. While Hunnam and Perlman procured something reasonable of recognition for the show, it was Sagal who rapidly beacme the show's champion entertainer. Her Madea-in-a-calfskin coat vibe gave the show an evident sparkle, and watching this previous sitcom sovereign play a particularly fearsome lady was an absolute rush. She was compensated with a Golden Globe win for Best Actress in a TV Drama for her difficulty in 2011, yet her exhibition just made us long for a show where she hefslef was the focal character.

That show may simply be Rebel. Anyone who's seen the 2000 film Erin Brockovich understands what primo material Brockovich is for an entertainer. All things considered, Julia Roberts rode it right to an Oscar win for Best Actress. In both reality and fiction, Brockovich is a bold crusader who appears to give trouble to pretty much everyone in her life, yet consistently be on the upright side of her legitimate battles.It's difficult to envision a job more qualified to Katey Sagal as she at long last assumes her legitimate position place stage.

Posted by mahendrajingga at 8:10 AM No comments:

Posted by mahendrajingga at 7:27 AM No comments:

The 35-year-old model lavished praise on the chart-topping pop star during the Grammy Awards, describing Dua - whose eye-catching nails complemented her on-stage outfit - as being "so cute".

Prior to that, Chrissy admitted to being wowed by Dua's attractiveness.

The model - who has quite 13 million Twitter followers - said on the micro-blogging platform: "Dua Lipa [smiling face with hearts emoji] (sic)"

And after Dua's performance at the awards ceremony, Chrissy added: "I looooove this i really like her. so cute (sic)"

The London-born star has admitted she felt sort of a "princess" in her Grammy Awards gown.

The 25-year-old singer walked the red carpet in a very high-shine chain metal rainbow-colored Versace gown with a butterfly motif and Dua revealed she loved her outfit.

She shared with People: "This dress was made on behalf of me by Versace. I love it. I feel, I want a princess in it so yeah, I'm thrilled."

Dua won the simplest Pop Vocal Album award for her record 'Future Nostalgia' and through her acceptance speech, she spoke of how the record had "changed [her] life".

She said: "'Future Nostalgia' means absolutely the world to me and it's changed my life in numerous ways.

"But one thing that i've got really come to grasp is what quantity happiness is so important. I felt really dated at the tip of my last album where I felt like I only had to form sad music to desire it mattered.

"And I'm with great care grateful then honored because happiness are a few things we all deserve and want in our lives."

Posted by mahendrajingga at 6:31 AM No comments: